Because the working conditions of the refractory castable for water-cooled beams are very bad, the thickness is relatively thin, generally 50-60mm. It is only connected to the water-cooled beam by metal anchoring hooks. Under high-temperature conditions, it is affected by factors such as mechanical vibration, rapid cooling, and heating when the furnace is shut down. Therefore, the strength and thermal shock stability of the refractory castable for water-cooled beams and the external mechanical stress are the main factors for its damage.

The damage mechanism of the refractory castable for the water-cooled beam of the heating furnace has been studied and analyzed, and it is described as follows. 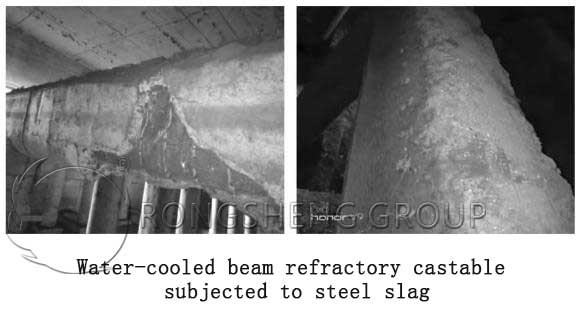 The welding of the anchor hook is very important, and it is generally required to be fully welded to the water-cooled beam. The minimum requirement is that both sides of the anchoring hook are spot welded, and the hammer will not fall off. During the construction process, some construction teams welded anchoring hooks were of poor quality, and they would fall off if they were tapped with a hammer. This would inevitably cause the refractory castable to fall off.

Rongsheng is an experienced manufacturer of refractory materials. Rongsheng has solved refractory lining problems for customers in more than 60 countries around the world. For example, Thailand, UAE, Turkey, Kuwait, South Africa, Malaysia, Vietnam, Netherlands, Philippines, Singapore, Egypt, Russia, etc. Rongsheng’s advanced and fully automatic monolithic refractory production line is second to none in the industry, with an annual output of 80,000 tons. If you need to buy refractory castables for heating furnaces or want to know our Rongsheng Refractory manufacturer, please contact us. We will provide you with services according to your specific needs.

Leave your requirements about the refractories you need. We will reply you within 24 hours. :

Other Related Refractory Materials You May Need:

Other Related Refractory Materials You May Need: